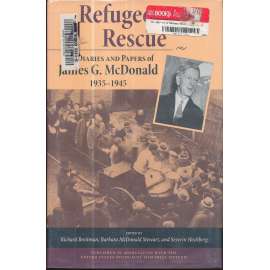 New evidence presented in Refugees and Rescue challenges widely held opinions about Franklin D. Roosevelt's views on the rescue of European Jews before and during the Holocaust. The struggles of presidential confidant James G. McDonald, who resigned as League of Nations High Commissioner for Refugees in 1935, and his allies to transfer many of the otherwise doomed are disclosed here for the first time. Although McDonald's efforts as chairman of FDR's advisory committee on refugees from May 1938 until nearly the end of the war were hampered by the pervasive antisemitic attitudes of those years, fears about security, and changing presidential wartime priorities, tens of thousands did find haven. McDonald's 1935–1936 diary entries and the other primary sources presented here offer new insights into these conflicts and into Roosevelt's inconsistent attitudes toward the "Jewish question" in Europe.